Tapezilla’s returning to the trail we blazed last year with our innovative and oft-imitated bracket system for Tape of the Year 2012. This year the field is cut to just the sweet sixteen, as we’re only covering one year’s worth of games. Like last year, you can still win big (OK, maybe not as big as last year) by filling out and submitting your bracket!

There may be fewer games this year, but don’t fret! We promise there will be just as many upsets, thrilling come-from-behind victories, and heartbreakers as last year’s benchmark Tape of the Last Two Years.

Download the bracket template today, fill it out, and submit your picks: 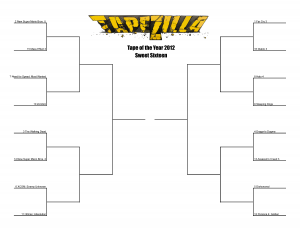 “But, Beaver, how is this going to work?”

Easy, dummy. Rather than our normally contrived method (each host picking his five top games of the year, assigning points to each game based on which place(s) they end up, totaling the score, and ordering the games by highest total score) we’re going to go through each match-up and vote on which game advances over the course a very special episode of Tapezilla, and one lucky tape will be crowned Tapezilla’s Tape of the Year (2012).

“I’m not sure there’s a way to make this any better than you already described it.”

As we accurately predicted last year, our “secret admirers” DID steal the bracket format. Repeatedly and unabashedly. We decided not to hold you, the listener, accountable for their lack of creativity (and appropriate crediting), so there are two ways you can participate:

Print out the bracket (PDF version here) and fill it out ahead of the show, then follow along as we absolutely destroy your delusions of grandeur with nonsensical upsets, spiteful advances, and other trademark Tapezilla hijinx. This will be fun, sure, but you won’t be able to WIN anything this way. For that you need to submit …

Fill out the bracket by any means necessary and submit it via email (tapezilla@35.167.173.106, include “bracket” in the subject). The person that submits the bracket that is the CLOSEST to the final, Official Tapezilla Tape of the Year 2012 bracket (as determined by our special episode) will win…. SOMETHING.

Some parting wisdom: remember who you’re dealing with. Just because a game was reviewed better than another game, got a higher Metacritic score, etc. has absolutely no bearing on who will survive any matchups.